Master The Half Twist Pin Curl 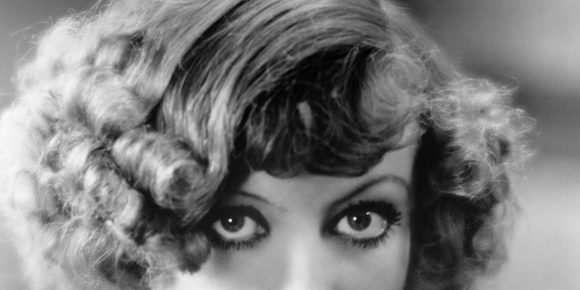 The right sort of pin curl, in my opinion, is a basic to the modern hairstyle as are, say, the right sort of fork and knife to modern eating. And, as in the case of the knife and fork, the pin curl also is a utensil! … The stylist’s utensil, something he uses to accomplish an end. With the pin curl, this end is the pompadour, soft waves, pert bangs, fluffy ringlets– the stuff modern coiffures are made of. 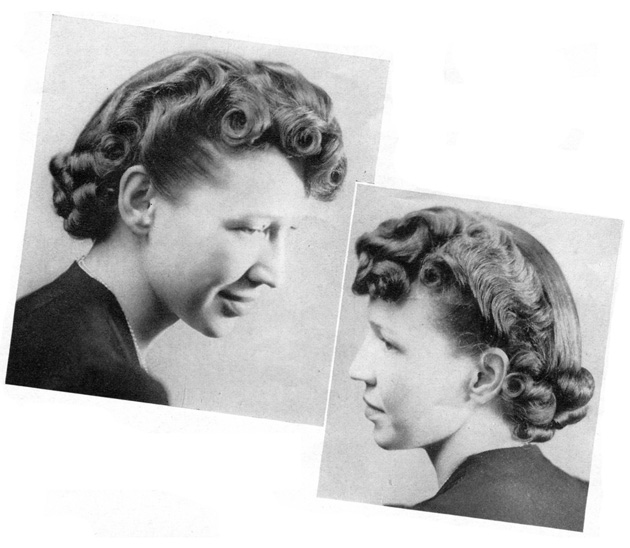 Again, just as we use the fork and knife with equal ease in eating fish or fowl, so do I believe that one type of pin curl can be successfully used for various styling effects. Not only is the pin curl basic to the hairstyle…. it is also extremely versatile. A good curl…. strong, durable, minus a ragged end and formed with exactness and uniformity…. can be adapted to just as many styling effects as the hairdresser has the imagination to conceive.

The important thing at which to arrive, of course, is the right sort of pin curl! I wind my pin curls over the left forefinger from the scalp out. On the last circle — that is, when I have wound to strand — I twist the strand around the forefinger of my right hand with a turn of the wrist, stretching as I twist, then lay the twisted strand down diagonally across the entire wind, completing the curl at the scalp, or starting point, with a tucking-under of the loose ends. I find that this final half twist effectively conceals, by tucking under, all ragged ends in the finished curl, whether I wish to brush it out as a wave, curl, pompadour or soft bang.

Before outlining the step-by-step technique for this pin curl method, it might be well briefly to mention what goes before — that is, proper shaping of the hair

Starting at the point where the patron parts her hair, I block one-inch squares, one after another, working from the hairline backward all around the head. Holding the strand at right angles to the scalp, I taper it to the desired length all over the head, ruffing backward with the scissors at the tip end of the strand but not in the area nearest the scalp. In this instance, the hair is approximately five inches long over the entire head. In thinning, the strand is ruffed for a distance of about three inches back of the ends, or to within about two inches of the scalp. Well-tapered ends are, of course most important to a well-shaped pin curl.

And now for the step-by-step technique on the pin curl formed with a half twist at the end. All curls are wound in the same manner.

FIGURE 1 — Working toward my ultimate aim of a band of pin curls four deep entirely around the head (see Figure 12), my first step is to find the side part which is individually correct for the patron. For this model, this part is placed as indicated by A. I make a second parting at right angles to this, about four and one-half inches from the hairline, or far enough back to permit winding four one-inch square curls to each one-inch division of hair. This part is indicated by B.

FIGURE 2 — Starting at the point where the two parts meet, the first inch-square sectioning of hair is made. Place the forefinger of the left hand at a right angle to the scalp, cushion down. With thumb and forefinger of the right hand, pull the strand of hair backward to the left and around the left forefinger. The strand should be held taut and stretched as it is wound.

FIGURE 3 — The first half of the wind is made around the left forefinger, passing the strand from the right hand to the thumb and middle finger of the left hand. Do not relax tension as the strand is passed from one hand to the other.

FIGURE 4 — Return the strand to the right thumb and forefinger in order to draw the strand around the left forefinger and thus complete another circle of the wind.

FIGURE 5 — The second revolution of the curl is wound in the same manner as the first, the strand being placed a little higher around the left forefinger, as thread is wound upon a spool.

FIGURE 6 — Two complete circles of hair around the finger are about as many as can be executed on hair five inches long, that is, if enough hair is to remain for a half twist at the end.

FIGURE 8 — The well-twisted strand is now laid diagonally downward across the previous winds to the scalp, with the thumb and middle finger tucking the ends neatly under the first circle of the curl nearest the scalp.

FIGURE 9 — To release the completed curl from the left forefinger, it is pushed downward with the thumb and third finger of the left hand and is held in place with all three fingers.

FIGURE 10 — Exactness and uniformity in placing the pins which hold the curls are as important as care in winding the curl. I insert one hairpin on each side of the curl, as indicated by the arrows. The pins are inserted so that they point toward the back fo the head.

FIGURE 11 — This shows the formation of the first row of four curls. Similar curls are formed in like manner across the top of the head from ear to ear … four curls to each one-inch parallel sectioning of hair. Curls are also placed in four rows across the nape.

FIGURE 12 — The completed curl formation is pictured here. When dry, these curls may be readily combed into waves, pompadour, bangs or ringlets, according to the style desired.

Any number of different coiffures may be arranged from this same fundamental pattern, I find. The one illustrated shows the side curls brushed into deep waves with an upward fling. The end so the waves turn under in a continuous puff. The top-lock curls are arranged in a bang design which combines wide waves and loose, open curls. At the name are soft puffs.